My life as a scientist 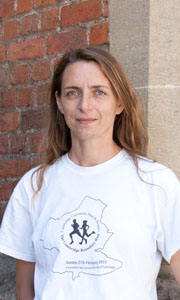 During my diploma thesis I was interested in the basic principles of cell division. I studied the mechanisms underlying DNA replication in the budding yeast Saccharomyces cerevisiae in the laboratory of Prof. Kim Nasmyth at the Institute of Molecular Pathology at the Vienna Biocenter.

During my PhD studies I was interested in the mechanisms underlying asymmetric cell division during the embryonic development of the nematode Caenorhabditis elegans. I performed a genetic screen to identify novel molecules required for the establishment of polarity and spindle orientation in the P1 blastomere of the two-cell stage C. elegans embryo. I identified, cloned and characterized the gene ooc-3, which is essential for the asymmetric cell division of the P1 blastomere. In addition, I studied the role of cytoplasmic dynein in the asymmetric cell divisions of the P1 and P2 blastomeres. Furthermore, I took part in a genome wide screen to identify key molecules regulating early cell division in the nematode C. elegans. My PhD work was performed in the laboratories of Prof. Anthony Hyman, Prof. Anne Ephrussi and Prof. Kai Simons both at the European Molecular Biology Laboratory (EMBL) in Heidelberg and the Max Planck Institute for Genetics in Dresden.

After my PhD I moved to the laboratory of Prof. Eric Wieschaus at the Department of Molecular Biology at Princeton University where I studied the molecule bicoid and its function in the establishment of domains of different nuclear density domains in the embryonic development of the fruitfly Drosophila melanogaster. I identified an effector gene of bicoid, giant, which is essential for the formation of the pre-cephalic furrow domain with decreased nuclear densities. This research project was awarded with a fellowship of the Howard Hughes Medical Institute, a long-term postdoctoral fellowship of the European Molecular Biology Organization (EMBO) and a senior postdoctoral fellowship of the Austrian Academy of Sciences (APART fellowship) to me. I continued my research at the Department of Genetics at the University of Cambridge, UK, until I was recruited as full-time professional athlete by the Austrian National Team in 2006.